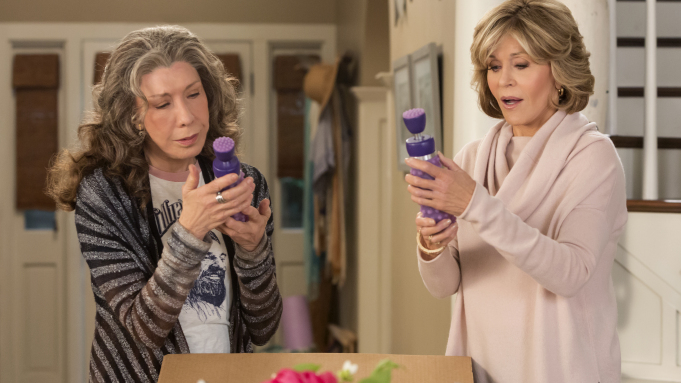 ‘Grace And Frankie’ To End With Season 7; Will Have Most Episodes Of Any Netflix Original

Grace and Frankie is set to end after its seventh and now final season – but not before amassing the most episode of any Netflix original series.

The digital platform has handed the Jane Fonda and Lily Tomlin comedy a 16-episode run for its final season, taking the total number to 94.

This comes ahead of the Season 6 premiere in January.

Season 5 ended with Frankie relieved to return to the beach house, while Grace sheepishly reveals she married Nick, played by Peter Gallagher.

The series has picked up 11 Emmy nominations during its run as well as six Screen Actors Guild Award nominations and a Golden Globe nomination for Tomlin.

“It’s thrilling and somehow fitting that our show about the challenges, as well as the beauty and dignity of aging, will be the oldest show on Netflix,” said co-creators and showrunners Marta Kauffman and Howard J. Morris.

Fonda and Tomlin added: “We are both delighted and heartbroken that Grace and Frankie will be back for its seventh, though final, season. We’re so grateful that our show has been able to deal with issues that have really connected to our grand generation. And their kids, and amazingly, their kids as well.  We’ll miss these two old gals, Grace and Frankie, as much as many of their fans will, but we’ll still be around. We’ve outlasted so many things – just hope we don’t outlast the planet.”

“Since its premiere in 2015, Grace and Frankie has expertly and hilariously demystified the experience of growing older and given a voice to the fastest growing segment of our population,” said Netflix’s VP of Original Series Cindy Holland. “Jane, Lily, Sam, and Martin have become role models for fans that span generations around the world, and we are so proud to have been a part of the show’s journey from day one. A special thanks to Marta, Howard, and the team at Skydance, who have been superb partners every step of the way.”

“David, Marcy and I, along with the entire team at Skydance couldn’t be prouder to have Grace and Frankie launch our television division. We are thankful to our partners at Netflix who stepped up to make a show for people who didn’t see themselves on television,” said Dana Goldberg, Chief Creative Officer, Skydance. “Seven seasons later, Grace and Frankie has captured the zeitgeist and audiences of all ages thanks to the brilliant vision of Marta Kaufmann and Howard Morris and the incredible talent of our cast led by legends Jane Fonda and Lily Tomlin.”