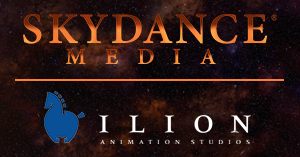 Skydance, a diversified media company that creates event-level entertainment for global audiences, today announced that it has launched an animation division and formed a multi-year partnership with Ilion Animation Studios, a dedicated CGI feature animation studio based in Madrid, to develop and produce a slate of high-end animated feature films and television series.

The slate will commence with two animated feature films currently in development, to be produced in Spain. The first, which will be released in 2019, is being written by Linda Woolverton (Alice in Wonderland, Maleficent, Beauty and the Beast, The Lion King). It tells the story of Elian, a teenager who comes of age using her magical powers to defend her family when the opposing forces of light and darkness threaten to divide her kingdom. Woolverton will serve as a producer on the film alongside David Ellison, Dana Goldberg, and Ilion’s Ignacio Pérez Dolset and Jose F San Román.

The second animated feature film, Luck (working title), is a comedy that pulls back the curtain on the millennia-old battle between the organizations of good luck and bad luck that secretly affects our daily lives. Jonathan Aibel & Glenn Berger (The Kung Fu Panda trilogy, Trolls) are writing the script and will serve as producers on the film, alongside David Ellison, Dana Goldberg, and Ilion’s Ignacio Pérez Dolset and Jose F San Román.

“It is incredibly gratifying to see one of my deepest passions come to life as we enter the animation business with Ilion,” said Skydance Chief Executive Officer David Ellison. “Together we aim to bring together the most creative visionaries, the best-in-class production skills, and the highest degree of technological innovation in the service of great stories.”

“In animation the possibilities to create imaginative new worlds are limitless and we are thrilled to expand the Skydance family to include Ilion and some of the most talented artists working in animated film today,” added Skydance Chief Creative Officer Dana Goldberg, who will oversee the slate.

“The combination of our proven creative team and our production capabilities with the deep film industry knowledge from David and his team at Skydance is a formidable setup from which to launch this new partnership,” said Ignacio Pérez Dolset, President and Chief Creative Officer at Ilion Animation Studios. “In addition to being known as one of the very best homes for artists in all of Hollywood today, it is their great track record of making movies with wide global reach that attracted us to Skydance,” added Jose F San Román, Chief Executive Officer of Ilion Animation Studios. “Together with our exceptionally talented writers and the experienced team at Skydance, we cannot wait to get started on the production of these first two animated films.”