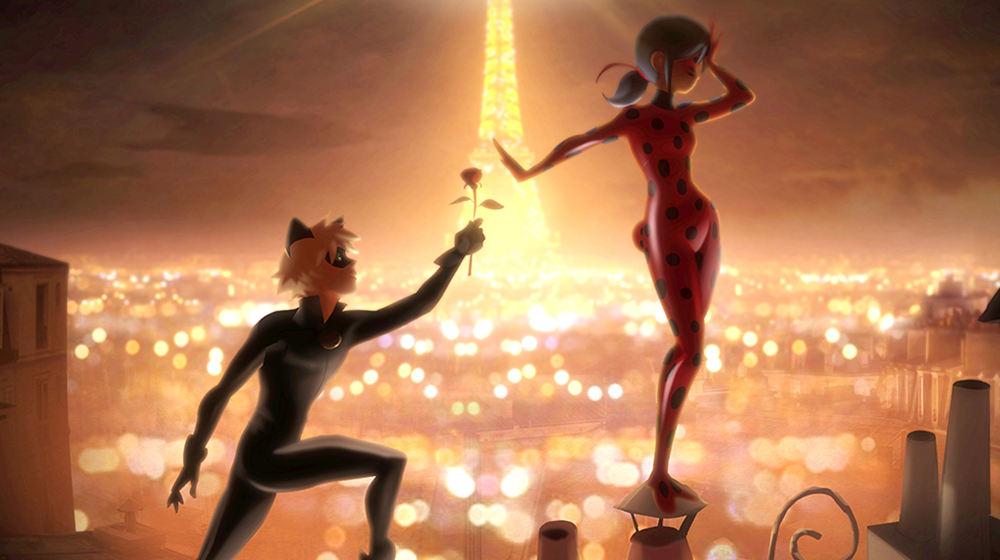 Santa Monica, CA – September 5, 2018 – Skydance Media in partnership with ZAG today announced that it has secured the live-action feature film and television rights to the global animated phenomenon Miraculous® – Tales of Ladybug & Cat Noir. Under the deal, Skydance plans to develop and produce the first-ever live-action adaptations based on the hit property with an anticipated release in 2020. The critically acclaimed, award-winning animated television series developed and produced by Jeremy Zag follows two heroes—Ladybug and Cat Noir—as they protect the city of Paris from super villains.

ZAG’s aspirational series Miraculous – Tales of Ladybug & Cat Noir—winner of the 2018 Teen Choice Award for Choice Animated Series, airs in over 120 countries worldwide, regularly scoring #1 rankings in kids 4-11 demo.  Miraculous has a passionate and active teen fan base, the “Miraculers” with over a million global subscribers to YouTube and 17 billion watch-time minutes in its lifetime with both official and user-generated content. The fans drive high interactivity on Instagram with over 300M followers regularly engaging. Miraculous consumer products have 350 licensees worldwide. Winning multiple industry awards in licensing and consumer products, merchandise passed the $100 million mark in retail sales in 2017.

“Jeremy and everyone at ZAG have done a tremendous job in creating and building Miraculous into the massive pop culture sensation it is today,” said Jesse Sisgold, President and COO Skydance Media. “We look forward to partnering with them to expand this incredible universe into the world of live-action.”

“I am thrilled to partner with Skydance to create live-action adaptations of Miraculous.  It’s been my long-time dream to bring this world to life,” said Jeremy Zag, Founder and CEO ZAG. “The Skydance team really understands and embraces the vision we have for this very special super hero love story. They have an incredible track record of producing exciting action with compelling characters and are the perfect team to express the magic and adventure of Ladybug and Cat Noir.”

Miraculous – Tales of Ladybug & Cat Noir follows the adventures of two seemingly typical teens with secret identities, Marinette and Adrien, who magically transform into superheroes, Ladybug and Cat Noir. As secret superheroes Ladybug and Cat Noir are partners in the action. But in the daytime, Marinette is just a normal girl, living a normal life.  Cat Noir will do anything to support and impress Ladybug, but does not know this is Marinette from his class. Marinette, the regular girl, in turn dreams of Adrien and simply gets little response. When evil threatens Paris, their beloved City of Lights, can they beat the unexpected villains? Miraculous taps into first love, secrets, friends, magic, duality and the romance of Paris.

ZAG is a global independent entertainment studio specializing in the creation and production of original, high-quality IP for kids and family in the film and TV sector. The company was founded in France in 2009 by Jeremy Zag, who expanded operations to Japan, the U.S., and Canada, between 2012 and 2017. Since inception, the company has produced more than 200 half-hours of high-quality CGI-animated content licensed to major broadcasters and digital partners in over 130 territories. ZAG has established the ZAG HEROEZ brand label that incorporates the broad universe of all its modern-day superhero stories to be told across TV, film and digital platforms. The company is most well-known for its global animation hit, ZAG HEROEZ Miraculous – Tales of Ladybug & Cat Noir (78 x 22’), which premiered in 2015.  Created by ZAG and co-produced by Method Animation, part of On Kids and Family.  Season two and three of the series are co-produced by Zagtoon and Method Animation.  Over 300 licensees have launched 3000+ products for the brand to date. ZAG was named “Breakout Studio of the Year” in 2016 by Animation Magazine’s World Animation Network.  For more information: www.zag-inc.com, https://www.youtube.com/c/miraculousladybug