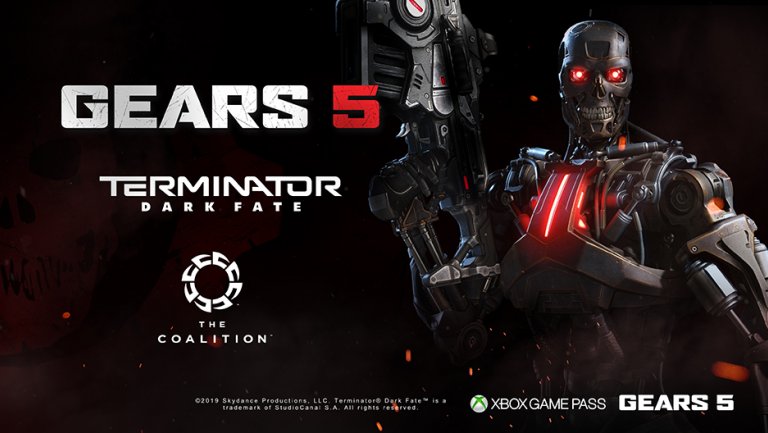 T-800s with chainsaw rifles, what more could you want?

Following announcements about Gears 5, including a launch date for the gameSept. 10, crashes of lightning engulfed the stage at the Microsoft Theater revealing a crouched, menacing Terminator cyborg before giving way to a brief teaser trailer showing a T-800 crushing human skulls and wielding the Gears franchise’s signature weapon, a Lancer Assault Rifle with a Chainsaw Bayonet.

Rod Fergusson, studio head at The Coalition, tells The Hollywood Reporter that Dark Fate feels like a “perfect fit” for the Gears universe.

“The story of Sarah Connor is similar to Kait’s [Gears 5‘s new protagonist] journey,” says Fergusson. “They’re both outsiders who were not part of this war and get pulled into it, have to embrace it become key members of the fight.”

“We’re confident that immersing iconic characters Sarah Connor and the Terminator T-800 Endoskeleton into the Gears universe will enhance the experience for fans of both franchises around the globe,” says Skydance Media CEO David Ellison.

Linda Hamilton, who returns to the Terminator franchise in the Sarah Connor role that she made famous in the first two installments in the series, will also voice the character in Gears 5. “One of the things we wanted was to make sure the people involved in the film were happy,” says Fergusson.

The new content will be a bonus add-on, but players who preorder Gears 5 will get the Dark Fate add-ons for free. The same is true for gamers who play the game in early access starting Sept. 6.

In the crossover, players can control either Sarah Connor or a T-800 Terminator model, each tweaked slightly for the game to make them stand out more in multiplayer matches. Other customizable aesthetic items based on the film will also be available.