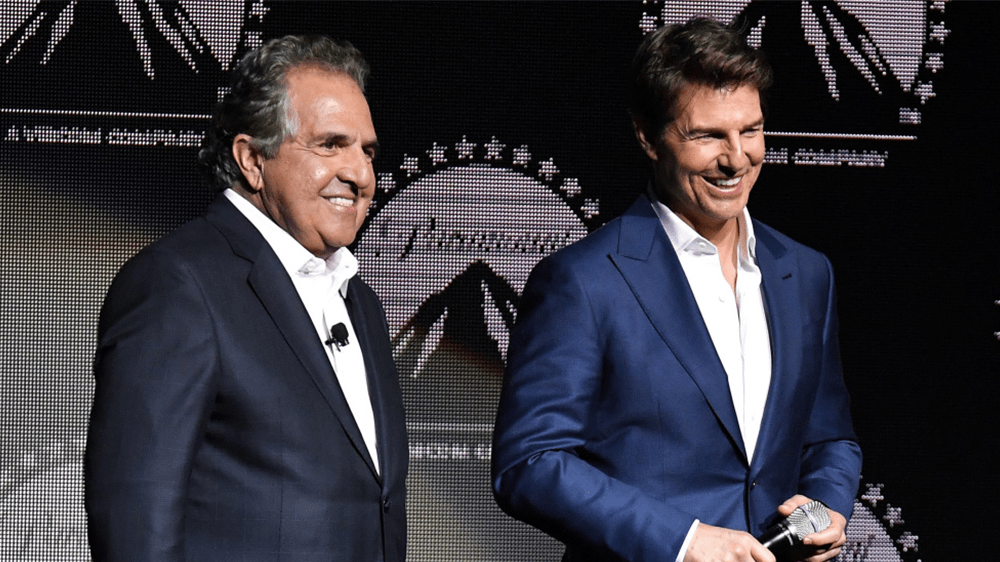 Tom Cruise returned to CinemaCon on Wednesday with a stunning exploration of his trademark: executing a daredevil stunt.

In this case, Cruise explained the details of a freefall stunt for “Mission: Impossible — Fallout” to a clearly impressed audience at Caesars Palace in Las Vegas, Nev. Cruise fell at 200 mph as agent Ethan Hunt to complete a skydiving scene in the sixth “Mission: Impossible” movie.

The three-minute scene in “Mission: Impossible — Fallout” takes place above Paris at sunset. Hunt and CIA agent August Walker (Henry Cavill) skydive at 25,000 feet into a lightning storm and are struck by lightening that leaves Walker unconscious, requiring Hunt to somehow catch and revive Walker before they hit the ground.

The sequence, of which the CinemaCon audience was shown raw footage, was shot in the United Arab Emirates and rehearsed at Leavesden Studios in the U.K. To rehearse the stunt, the crew built a massive wind tunnel.

Director Chris McQuarrie explained that the elaborate scene was in service of making sure moviegoers will believe it’s actually Cruise skydiving. “How much is physically possible without killing Tom?” he told the crowd.

Castmate Simon Pegg said the shots were nerve-wracking. “The difference between you seeing these stunts and us seeing them is that you know that Tom lived,” he said Wednesday.

Paramount Pictures Chairman Jim Gianopulos, who presided over the two-hour presentation, agreed that watching the dailies was a challenge, given the level of danger to Cruise. In addition to the rough footage of the freefall, the studio also showed an elaborate chase scene through Paris.

Cruise praised Gianopulos during the presentation, saying, “It’s so good to have Jim at Paramount, what you’ve done — his nickname is ‘Gentleman Jim’, and he’s also a genius.”

Three years earlier at CinemaCon, Cruise provided the details of another stunt in “Mission: Impossible — Rogue Nation,” in which he hung from the side of a jet during take off.

Along with Pegg, Rebecca Ferguson, Ving Rhames, Alec Baldwin, Michelle Monaghan and Sean Harris are reprising their roles from previous films while Cavill, Vanessa Kirby and Sian Brooke have come on board as new characters. Paramount has set a July 27 release date.

The franchise is based on the TV series that ran from 1966 to 1973. The first film opened in 1996 when Cruise was 33. The five films have grossed a combined $2.7 billion worldwide.