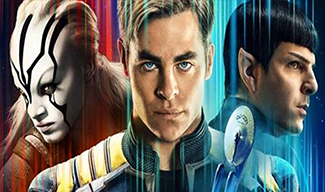 FROM DIRECTOR JUSTIN LIN AND PRODUCER J.J. ABRAMS COMES ONE OF THE BEST-REVIEWED ACTION MOVIES OF THE YEAR

The All-New Star Trek Adventure Takes Off on 4K Ultra HD™, Blu-ray™ and

Get it on Digital HD Four Weeks Early on October 4!

Director Justin Lin (Fast & Furious) delivers “a fun and thrilling adventure” (Eric Eisenberg, Cinemablend) with an incredible all-star cast including Chris Pine and Zachary Quinto, as well as newcomers to the STAR TREK universe Sofia Boutella (Kingsman: The Secret Service) and Idris Elba (Pacific Rim).  In STAR TREK BEYOND, the Enterprise crew explores the furthest reaches of uncharted space, where they encounter a mysterious new enemy who puts them and everything the Federation stands for to the test.

The STAR TREK BEYOND 4K Ultra HD, Blu-ray 3D and Blu-ray Combo Packs are loaded with over an hour of action-packed bonus content, with featurettes from filmmakers and cast, including J.J. Abrams, Justin Lin, Chris Pine and Zachary Quinto. Go beyond the movie’s incredible edge-of-your-seat action and see how an unprecedented 50 new alien species were created, including STAR TREK’s newest villain Krall and the rebellious warrior Jaylah.  Journey through the iconic franchise in celebration of STAR TREK‘s 50th Anniversary, enjoy a hilarious gag reel and explore deleted scenes you didn’t see in theaters.  In addition, the sets include tributes to actors Leonard Nimoy and Anton Yelchin.  The film also boasts a Dolby Atmos® soundtrack* remixed specifically for the home theater environment to place and move audio anywhere in the room, including overhead.

The STAR TREK TRILOGY Blu-ray Collection includes Blu-ray Discs™ of STAR TREK (2009), STAR TREK INTO DARKNESS and STAR TREK BEYOND with access to a Digital HD copy of each film.

The Blu-ray Combo Pack, Blu-ray 3D Combo Pack and 4K Ultra HD Combo Pack available for purchase include a Digital Version of the film that can be accessed through UltraViolet™, a way to collect, access and enjoy movies.  With UltraViolet, consumers can add movies to their digital collection in the cloud, and then stream or download them—reliably and securely—to a variety of devices.