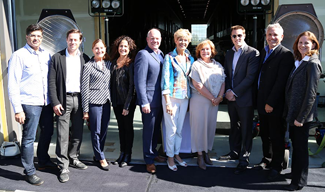 Surrey, BC – Join Mayor Linda Hepner, Skydance Media CEO David Ellison, and Minister of Technology, Innovation and Citizens’ Services Amrik Virk for a ribbon cutting ceremony at Skydance Studios in Newton. The former Pacific Newspaper printing press building has been converted into a state of the art production facility that houses five sound stages accommodating a staff of up to 400 people. Skydance Studios is currently ramping up to produce the futuristic sci-fi drama Altered Carbon for Netflix. Skydance Media is responsible for the Star Trek and Mission: Impossible film franchises, as well as the Emmy-nominated sitcom, Grace and Frankie on Netflix.

Sneak Peek inside the studio for the media following the official ceremony.