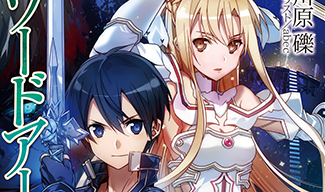 SAO is a global franchise based on the popular light novel series of 22 books by author Reki Kawahara, which have collectively sold over 19 million print copies worldwide. The novels have been spun off into nine comic adaptations, two anime television series, a video game and merchandise program, and – most recently – an animated film set to be released in Japan in 2017.

The all-new Skydance Television series will follow a brilliant young beta tester Kirito and his group of friends when they are trapped – alongside 10,000 other people – in a next-generation virtual reality online role-playing game. The game is a world unto itself: filled with sword fighting, monsters and mystery, where the stakes are life and death. Kirito and an ensemble of diverse characters must fight their way through this hostile environment while making lives for themselves in the fantastical world that is Sword Art Online. Following its television series, Skydance plans to launch a first-of-its-kind SAO virtual reality experience through Skydance Interactive.

“At Skydance we are in the business of world-building and SAO is a massive pop-culture phenomenon from which we plan to launch a full-scale and wide-ranging set of live action franchise extensions across our business verticals, beginning with television,” said Skydance Media Chief Executive Officer David Ellison. “We look forward to working alongside Laeta, Reki Kawahara and the teams at KADOKAWA and Aniplex to build out a deeply immersive new universe of SAO in an authentic way that honors its well-established fan base around the globe.”

“I am excited and moved that Sword Art Online will be adapted into a live action series by the highly respected Skydance Media,” commented Reki Kawahara. “I would like to take this opportunity to express my appreciation and gratitude to everyone involved in this project, and to the fans all over the world who have so generously and enthusiastically supported SAO.”

“For years I have been inspired by the inventive and masterful storytelling of the SAO franchise,” added Kalogridis. “I’m thrilled to get the opportunity to work with such talented partners to bring this cutting-edge yet timeless story to a new format at Skydance.”

Laeta Kalogridis is a film and television writer-producer. Her writing work includes the first X-Men, Tomb Raider, Scream 3, Alexander, Night Watch, Bionic Woman, Pathfinder and Martin Scorsese’s Shutter Island, which she also executive produced. She worked alongside Skydance as writer and producer on 2015’s feature film Terminator Genisys. Additional producing credits include James Cameron’s Avatar and White House Down. Kalogridis has a first-look and consulting arrangement with Skydance and is currently writing and executive producing the studio’s sci-fi television series Altered Carbon for Netflix. She is repped by WME.